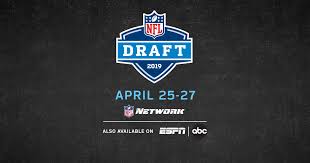 With free agency seemingly being over, we’re less than one month away from the NFL Draft. Here’s my mock draft 2.0

While the Cards do have QB Josh Rosen, they will move on from him as they select QB Kyler Murray. Murray is not the biggest quarterback, but he’s very athletic, mobile, and can make the throws to succeed in the NFL. Pairing him with Cardinals’ head coach, Kliff Kingsbury will do Murray wonder and will translate his game more smoothly to the NFL.

With the Cardinals taking Kyler Murray at one, that leaves the 49ers with the chance of drafting the top two players in this draft. Lately, the conversation has been whether the 49ers take DE Nick Bosa or DT Quinnen Williams. I believe with the 49ers trading for LB Dee Ford, I believe Williams makes the most sense. Williams is very athletic and can disrupt the opposing pass and run game. The 49ers can plug him in alongside Ford, Deforest Buckner, and Solomon Thomas.

The Jets need an edge rusher and they get one here with Nick Bosa. Bosa is one of the best pass rushers in this draft and has multiple ways to get to the opposing quarterbacks. He can help the Jets D-Line tremendously.

Losing Khalil Mack hurting the Raiders’ defense a lot. Trying to replace him is something the Raiders are looking to do. With the fourth overall pick, the Raiders select edge rusher, Josh Allen. Allen can get the quarterback while also have the athletic ability to cover running-backs and tight-ends.

With Kwon Alexander gone, the Buccaneers are going to need some help in the middle of that defense. Insert LSU Linebacker, Devin White. White is a tough, smart, instinctive playmaker who excels against the run and the pass and can replace Alexander in that Buccaneers’ defense.

Eli Manning is getting older and it’s time for the Giants to try and find his successor. While Daniel Jones could be an option here, the Giants select QB Dwayne Haskins. Haskins is a big arm quarterback who fit the Giants’ system and the Giants can sit him a year and let him develop behind Eli before handing him the keys to the team.

With the signing of Nick Foles, the Jaguars will have to protect him, and they need protection help at right tackle. At 7, they select offensive tackle Jawaan Taylor out of Alabama. Taylor have experience at right tackle, and he can come in and protect Nick Foles.

The Detroit Lions was able to address one side of their defensive line with the signing of DE Trey Flowers. With the eighth overall selection, they address the other side of the defensive line as they select Michigan’s Rashan Gray. Gray and Flowers are very similar in size and skill and by pairing them together, they will have two rushers who knows how to get to the opposing quarterbacks.

With DT Kyle Williams retiring, the Bills select DT Ed Oliver at 9. Oliver is one of the most talented prospects in this draft and could be plug-in anywhere on the Bills D-Line. He’s very capable of getting to the quarterback and chasing down backs out of the backfield.

The Broncos might be all in on Joe Flacco, but Flacco is not the long-term choice. Instead, it will be Missouri’s Quarterback, Drew Lock. With Flacco in place as the Broncos’ starter, Lock can sit and develop a year or two before becoming the starter.

One of the Bengals’ biggest needs is their linebacker position. Recently, the Bengals released LB Vontaze Burfict, who couldn’t stay out of trouble and stay on the field. At 11, they select Devin Bush out of Michigan. Bush might be a bit small playing linebacker, but he’s very smart and can find ways to make plays on that Bengals’ defense.

Even though the Packers have tight-end Jimmy Graham under contract for the next two years, he wasn’t the playmaker he was back when he was playing for the Saints and Seahawks. At 12, they select Iowa’s TJ Hockenson. While he might not be the best blocking tight end in the draft, he can come in and immediately be a target for Aaron Rodgers.

With the Dolphins signing QB Ryan Fitzpatrick and having an eye on the quarterbacks in the 2020 draft, they could address other needs in the draft like offensive linemen. At 13, they select Alabama’s Jonah Williams.  With Williams, the Dolphins can play him at either tackle spot and play him at the guard position.

In a NFC South division featuring Quarterbacks Drew Brees and Cam Newton, it’s always good to add edge rusher. At 14, the Falcons select Montez Sweat. Sweat impressed a lot of people at the combine and could help the Falcons find ways of getting to the quarterback.

With QB Alex Smith out for the 2019 NFL season, the Redskins have a depth chart featuring Case Keenum and Colt McCoy. Now with the Cardinals possibly drafting quarterback Kyler Murray first overall, they will most likely make QB Josh Rosen available and the Redskins could make a trade for him, but in this mock draft, they don’t. Instead, they select quarterback Daniel Jones at 15. Jones is the most pro-ready quarterback in the draft, and he can develop behind Keenum before taking over the reins as the starter in Washington.

With Julius Peppers retiring, the Panthers select edge rusher, Brian Burns out of Florida State. Burns is an explosive athlete and knows how to get to the backfield.

Trading away DE Oliver Vernon to the Cleveland Browns will not help the Giants at all. At 17, they select Clemson DE Clelin Ferrell. Ferrell was one of the most productive and impactful defenders in college football over the last two seasons, racking up 21 sacks along the way.

At 18, the Vikings tried to improve their offensive line by taking pressure off Quarterback Kirk Cousins. With this selection, they select Oklahoma’s tackle, Cody Ford. Ford could come in and make an impact in the Vikings’ pass and run game.

With tight-end Delanie Walker getting another year older and coming off an injury, it’s time to add another weapon for quarterback, Marcus Mariota. Noah Fant impressed a lot of people at the combine and could add a lot of value to both the Titans’ pass and run game.

At twenty, the first and best cornerback falls off the board as the Pittsburgh Steelers select former LSU cornerback, Greedy Williams. Williams is tall and fits the mold of what the Steelers look for in cornerbacks. Hopefully, he can help the defensive woes that the Steelers have in their secondary.

The Seahawks recently lost Safety Earl Thomas and they look to replace him at 23 with Safety Taylor Rapp out of Washington. Rapp is a versatile defender who could play either safety spot and can be a big hitter in that Seahawks’ defense.

It’s year two for quarterback Lamar Jackson and I believe the Ravens must surround him with talent. At 22, they select Ole Miss DK Metcalf. Metcalf is a big bodied receiver, standing at 6’4 and is very explosive. He can become the #1 wide receiver in Baltimore and replace Michael Crabtree.

If the Houston Texans want to get better and be more successful next year, they ’ll have to protect their quarterback, Deshaun Watson. Since the Texans didn’t sign any lineman in free agency, they will look to address the need through the draft. At 23, they select offensive tackle Andre Dillard out of Washington State. The Texans can plug Dillard at either tackle spot, and he can help protect Watson right away.

With Marshawn Lynch’s future as a Raiders up in the air, the Raiders definitely need a running back and they get one here with the selection of Alabama’s Josh Jacobs. While he was overshadowing in a crowded backfield at Bama, he’s clearly the best running back in the draft. Jacobs is a three-down back, extremely powerful, can catch out of the backfield, and will help take the pressure off quarterback Derek Carr.

Throughout the entire season last year, the Eagles’ cornerbacks were going down left and right, and they were down to fifth string corners in the NFC Divisional game against the Saints. This offseason, they were able to re-sign their top cornerback, Ronald Darby. At 25, they strengthen their position with the select of cornerback, Bryon Murphy. Murphy is 5’10, but he’s very technically sound and knows how to attack the ball.

One of the needs that the Indianapolis Colts are looking to address is the defensive tackle position. At 26, they can address that with the selection of Christian Wilkins. Wilkins can start day one and has superior speed, is very athletic, and can disrupt a lot of plays.

With their third pick in the first round, via the Dallas Cowboys, the Raiders address their cornerbacks’ position. At 27, they select Temple’s cornerback, Rock Ya-Sin. Ya-Sin is a physical cornerback who loves to hit and can shut down wide receivers from the line of scrimmage. The Raiders will be able to play him on the opposite side of Gareon Conley.

With all the top offensive tackles and quarterbacks already select, the Chargers address their wide receivers’ position. The Chargers lost Tyrell Williams in the offseason and they need to add another one just in case Keenan Allen or Mike Williams goes down with an injury. At 28, they select Ole Miss’s AJ Brown. Brown played a lot in the slot at Ole Miss and could play in the slot for the Chargers. The Chargers could also play Brown on the outside as he could become a big target for Phillip Rivers down in LA.

With the Chiefs letting Mitch Morse leave in free agency, they select the top interior lineman in this draft, Garrett Bradbury at 29. Bradbury can come in and protect MVP quarterback, Patrick Mahomes right away.

With Randall Cobb signing to Dallas, the Packers select N’Keal Harry at 30. Harry is a big-body playmaker who would become an ideal replacement for Randall Cobb and would immediately be a target for Aaron Rodgers.

The Los Angeles Rams have not re-signed Ndamukong Suh and if they don’t, they’ll most likely replace him in the draft. At 31, they select Norte Dame’s Jerry Tillery. Tillery can step in along side Aaron Donald and can make plays inside the pass and run game. Tillery is very powerful and have very good technique to play in the NFL.

With Rob Gronkowski retiring this season, the Patriots will have to try and replace him. At 32, they select Alabama tight-end, Irv Smith Jr. Smith is fast, athletic, and can block and can make plays in the Patriots’ offense.